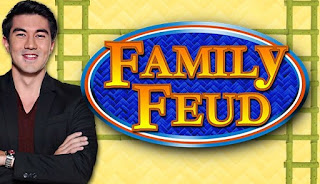 There are three versions of Family Feud in the Philippines, aired on three networks. The first version aired every Sunday on ABC (now TV5) and was hosted by Ogie Alcasid, with voice over provided off screen by Jeff Utanes (later Michael Knight), from November 19, 2001 to December 28, 2002.

The second version, was hosted by Richard Gomez (later Dingdong Dantes and Edu Manzano) on GMA Network from October 13, 2008 to July 1, 2011.

The third version is hosted by Luis Manzano on ABS-CBN premiered on April 9, 2016. the show where two families compete to name the most popular responses to survey questions in order to win cash and prizes.