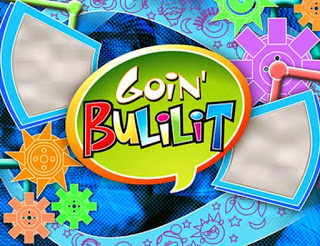 Goin' Bulilit (lit. Goin' Kids) is a sketch comedy show broadcast on and created by ABS-CBN in the Philippines. It is aired every Sunday after TV Patrol Weekend and before Dance Kids It is a gag show featuring children in various comedic situations.

The show's aim is to provide laughter towards the audience by showcasing gags, sketches, and segments. The cast is composed of child actors, excluding Dagul, who portrays different roles ranging from young to old characters every week to bring entertainment.

At the end of 2005, Goin Bulilit immediately received an award from the PMPC Star Awards for TV for "Best Gag Show", tied with Bubble Gang. Soon after, the show received multiple awards and nominations among variety of award-giving bodies such as the KBP Golden Dove Awards and the Gawad TANGLAW. In addition, not only is the show being recognized, but also to the casts. In fact, the PMPC Star Awards for TV had nominated Sharlene San Pedro for "Best Comedy Actress" two times consecutively, as well as single nominations for Harvey Bautista, Aaliyah Belmoro, and Ashley Sarmiento for "Best New Male/Female TV Personality" category.

Though its cast is almost entirely kids, Goin' Bulilit creator Edgar "Bobot" Mortiz admitted that the show is not for kids.[5] He added that the ABS-CBN wanted a gag show that can compete with Bubble Gang of rival GMA Network, but as the network have not enough suitable actors for the planned program, he thought up of having one with kids instead.