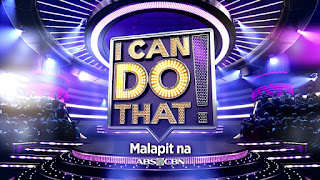 I Can Do That is a Filipino reality television entertainment competition program shown on ABS-CBN. The series is an adaptation of the Israeli show of the same name produced by Armoza Formats, where celebrity contestants will be challenged to showcase various entertainment acts within one week of practice. The show premiered on March 11, 2017, and is hosted by Robi Domingo and Alex Gonzaga.