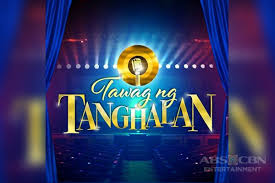 Tawag ng Tanghalan (Tagalog for Call of the Stage) is an amateur singing competition currently aired as a segment of the noontime show It's Showtime that first aired on January 2, 2016. Dubbed as "Your all time favorite search for outstanding amateur talents", the competition is open to Filipino contenders from Metro Manila, Luzon, Visayas, and Mindanao.

This is the latest revival of the original Tawag ng Tanghalan talent search show which debuted in 1953–1972 and later revived in 1987–1988. OPM legends like Armand Panlilio, Nora Aunor, Novo Bono Jr., Pepe Pimentel, Edgar Mortiz and Diomedes Maturan[1] were among the biggest winners[2] of the original show.[3]

Noven Belleza emerged as the grand champion for the first season that spanned a year (2016-2017).[4]

Tawag ng Tanghalan Kids was the next season intended for young contenders ages 7 to 13 years. Auditions started on December 4, 2016[5] and on March 13, 2017, following the conclusion of the Tawag ng Tanghalan on March 11, 2017 held at Resorts World Manila. Its grand finale was held on June 10, 2017.