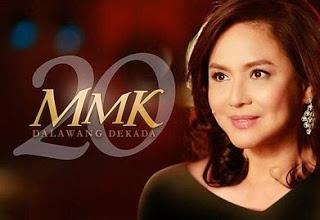 Maalaala Mo Kaya (English: "Would you remember?"; abbreviated as MMK) is a Philippine drama anthology series broadcast on ABS-CBN every Saturday evenings after Home Sweetie Home and before Your Face Sounds Familiar and is hosted by Charo Santos-Concio. It has become the longest-running drama anthology on Philippine television and in Asia. The program features weekly real life stories or anecdotes of common people or even famous celebrities and personalities through letter sending. The series has a counterpart radio program being broadcast on DZMM called "Maalaala Mo Kaya sa DZMM", a paperback ("pocketbooks") adaption and a comic book adaptation under Mango Comics & Sterling.