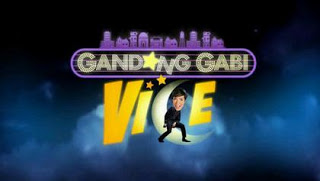 Gandang Gabi, Vice! (A Beautiful Evening, Vice!) is a Philippine comedy variety show and talk show hosted by stand-up comedian Vice Ganda.Debuting on May 22, 2011, it airs every Sunday after Rated K and before Kapamilya Weekend Specials on ABS-CBN. For its first season, the show was slated for thirteen episodes.The show focuses on interviews with media personalities and comedic interactive segments, and also features live acts from various performers. After the announcement of the show's planned end on February 19, 2012, due to a lot of feedback requesting the continuation of the show, it was announced that the supposed end of the show on said date was only to be the finale of the first season, and that the show will continue with a second season the following week.