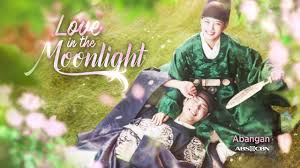 Love in the Moonlight is a South Korean television series starring Park Bo-gum and Kim Yoo-jung with Jinyoung, Chae Soo-bin and Kwak Dong-yeon. It is a coming-of-age story and youth romance set during 19th-century Joseon Dynasty based on the novel Moonlight Drawn by Clouds which was first serialized on Naver in 2013 and consequently published as a five-part series of books in 2015. It aired every Monday and Tuesday from August 22, 2016 until October 18, 2016 on KBS2 at 22:00 (KST) for 18 episodes.

A domestic and overseas hit, Moonlight achieved peak audience rating of 23.3% in South Korea and was praised for its production, performances and music.It received six nominations at the 53rd Baeksang Arts Awards including Best Drama, and won Popularity Awards for leads Park and Kim. The press referred to its influence as "Moonlight Syndrome" as it topped topicality, content and brand reputation charts in and beyond its run.