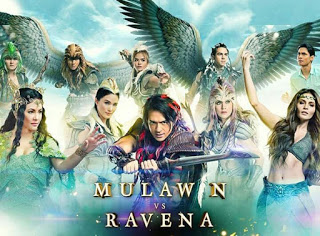 Mulawin vs Ravena is an Filipino fantasy television series created and produced by GMA Network. It is a sequel to the fantasy series Mulawin televised in 2004 and the 2005 film, Mulawin: The Movie starred by Richard Gutierrez, Angel Locsin and Dennis Trillo. It premiered on May 22, 2017 starring Dennis Trillo together with an ensemble cast succeeding the most grandest Philippine epic telefantasya Encantadia. In most of the cast, only Trillo and Miguel Tanfelix reprised their roles from the original series and movie as Gabriel and Pagaspas respectively. The series was directed by Don Michael Perez and Dominic Zapata, the same team who developed the original series. It is not a retelling-requel of Mulawin unlike Encantadia, but it comprises the continuation of the stories, affairs, and the aftermath which includes the additional generational characters and the introduction of the Bathalumans, the origin of Dakila, the founding demi-god of Pugad Lawin kingdom in Avila, Encantadia. Mt. Apo, is situated in Avila, in the mountains of Encantadia. Mandarangan (Supreme God) and Sandawa (goddess of Nature and keeper of Mt. Apo) had three offsprings: Magindara, who becomes keeper of the domain of water; Lumad, protector of the domain of land; and Dakila, guardian of the domain of air. Lumad marries a human and becomes mortal. They establish a tribe of nature-loving men who have considered Mt. Apo their home. This tribe would eventually splinter into many other tribes of indigenous people, and collectively, they would be called Lumads, in memory of their common ancestor. Magindara chooses not to marry or fall in love with a mortal upon the strict advice of her mother Sandawa. Marrying a mortal would mean embracing mortality, and Sandawa does not want her daughter Magindara, her only remaining companion, to follow the footsteps of Lumad. Magindara, like her mother, has remained immortal as a mermaid, being the guardian in Lake Venado at the heart of Mt. Apo. Dakila, as protector of the skies, establishes a kingdom of Avians in Avila, the highest point in Mt. Apo. They have called themselves Mulawin. Though humans have caused the destruction of the forests, forcing Avians out of their own habitat, Dakila and most of the Mulawins have maintained their benevolence towards humans. This does not sit well with a faction of Mulawin headed by Ravenum. They decide to breakaway and form their own tribe called Ravena and establish a kingdom called Halconia in the fiery volcanic mines of Mt. Apo.