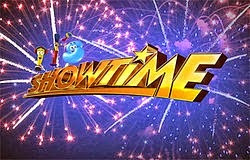 It's Showtime (formerly known as Showtime) is a Philippine noontime musical variety show broadcast on ABS-CBN. The show is also broadcast worldwide through The Filipino Channel. The show premiered on October 24, 2009 as a morning talent show for over four regular seasons and various special editions. On January 28, 2012, the show aired its final episode with its two-year competition format and ended with an impartial farewell. On January 30, the program revealed a teaser showing its reincarnated look as a reformatted noontime show now entitled It's Showtime, which premiered on February 6, 2012. The show simulcasted on Studio 23 (now ABS-CBN Sports and Action) during its relaunch week. It aired live daily on CgeTV's