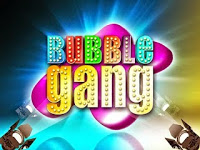 Bubble Gang is a sketch comedy television show in the Philippines. It airs every Friday evenings by GMA Network. The show is part of the network's GMA KiliTV block. Currently, it is now the longest-running gag show in Philippine television. The TV program is known for their parodies of TV commercials, politicians and current events. The show used to be one-week delayed on GMA Pinoy TV but has "caught up" and is up-to-date as of 2011.